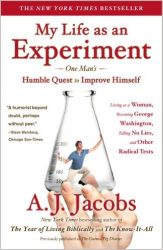 Jacob’s past books have focused on his year-long experiments – reading the entire Encyclopedia Britannica and living “biblically” (kinda). His My Life as an Experiment: One Man’s Humble Quest to Improve Himself by Living as a Woman, Becoming George Washington, Telling No Lies, and Other Radical Tests (formerly the Guinea Pig Dairies) chronicles his shorter month-long experiments. Some, like telling the truth no matter what, are unqualified failures (albeit hilarious ones). His online dating experiment is kind of creepy. And his experiment to do whatever his wife asks is incredibly satisfying. Not as in-depth or thought provoking as his past books, but still an entertaining read.