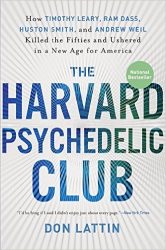 What we now associate with Timothy Leary – LSD, Grateful Dead concerts, hippies, tuning in and dropping out, first started out as psychological experiments at Harvard University. Leary, a charismatic and well-liked professor, hoped to help inmates rehabilitate by giving them mystical experiences via LSD. His early partners, lab assistants and fellow researchers soon became sucked into the LSD world. Leary looses his job and home, gets kicked out of one country after another and finally ends up being broken out of prison by the Black Panthers. Lattin follows the path of Leary’s life as it spins out of control, along with the stories of Richard Alpert (Ram Dass), Huston Smith (leader in the study of world religions) and health guru Andrew Weil. A fascinating look at the divergent and often strange paths life can lead us down.