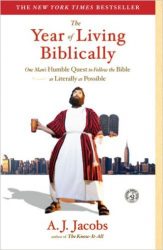 From the author of The Know-it-All comes another awesome title. At loose ends after his year reading the encyclopedia, Jacobs decides to embark on another experiment. As a agnostic Jew he always had some interest in religion and the perplexed fascination with belief that many non-believers have.

Jacobs decides to meet the Bible head on. After completing a 70+ page list of commandments and rules from the Bible (old and new testament), Jacobs starts adding biblical commandments into his daily life. After soon realizing that many rules are contradictory and simply untenable, he decides to focus on one or two commandments each week.

These biblical rules affect Jacobs in every way. He grows an enormous beard, wears white clothing, has restrictions on his eating habits, money, time spent and relations with everyone around him. All this, of course, must be done as he continues working as an editor for Esquire magazine and living in New York City. While Jacob’s book is an eye-opener about biblical law and many of the religious groups he visits, it is also deeply amusing. Men are not allowed to sit on chairs where an unclean woman has sat. Jacobs wife passive-aggresively sits on all the chairs in the house, forcing him to stand or bring his own stool. His attempts at building a hut in their NY apartment living room are a hoot as are his accounts of the general populous’ reaction to his massive beard, white clothing and tassels. A must read.