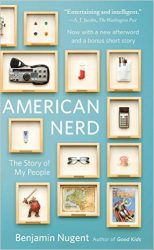 In American Nerd, Nugent takes a look at “his” people – nerds of many colors. While I do agree with my friend Meg’s assessment that Nugent does tend to portray his experience being a nerd as the definitive definition (with little or no reference to female nerds) he does cover a lot of ground. In addition to the standard D&D playing, Star Trek watching highly academic nerd, Nugent also touches are some of the more …robust nerds, such as the Society for Creative Anachronism nerds who make weapons and armor, then fight in them. Nugent also touches on groups like Asperger’s, computer geeks, cosplay nerds and other subsets. Whether they are your people, familiar but foreign or completely out of your realm of understanding, I think Nugent gives a pretty good overview of the genre along with plenty of amusing anecdotes.