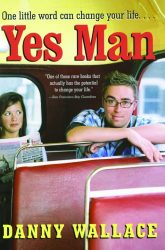 founder, comedian and author of Friends Like These Danny Wallace is the British equivalent of AJ Jacobs (or perhaps vice versa?). He’s happiest when he’s on a quest, a self-created adventure to achieve something. Wallace comes up with a set of self-created rules, then strives to follow them as closely to their ludicrous conclusion as possible.

In Yes Man, Wallace attempts to say “yes” to everything for a year. There are, of course, the expected “yeses” we would all run into – supporting charities, getting quotes for double-glazing (which Wallace feels obliged to tell the ecstatic salesman he already has), going to parties that he’d prefer to miss, responding to spam emails, etc. Yet, many of his “yeses” turn out to be remarkably positive. By agreeing to damn near anything in meetings at work, he launches a new career as a tv presenter. By agreeing to buy a car at a party, he is able to motor about more easily from one adventure to another. He meets new-agers, visits Stonehenge, enters a German-looking contest, enters a neighbor’s cat into a contest, signs up for random courses and sees far too many bad plays His friendships thrive.

Of course, not all experiences are positive and one ends up being outright dangerous. Hacking through scenes like when Wallace runs into his ex-girlfriend and her new date and the date invites Wallace along to dinner, just to be polite, are agonizing. Hilarious, but mostly agonizing.  Still, the whole experience changed his life very much for the better (and not just because a Hollywood movie was made from the book). An uplifting, funny and occasionally maddening book.