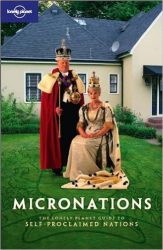 Micronations, sometimes also referred to as model countries and new country projects, are small, self-proclaimed entities that claim to be independent sovereign states but which are not acknowledged as such by any recognized sovereign state, or by any supranational organization. – Wikipedia

Micronations are delightfully loony. For anyone who has uttered the phrase, “That’s it, I’m moving to Canada!”, perhaps you should first consider a micronation? Whether online or in a real location, these quasi-real, quasi-independent countries make the world a far more interesting place.

Micronations come in a few general flavors. There are the protest nations, like the  Principality of Hutt River in Australia, or Whangamomona Republic in New Zealand. Hutt River was originality conceived as a protest to Australian government caps on farm production. It is still in existence and has its own currency and post office. Whangamomona Republic was formed as a protest to being forced to play soccer in their former rival’s league. Hey, we all have our own snapping point.

Some micronations come into being simply because no-one else wants the land (an interesting concept discussed in Unruly Places), or their territory is not properly included in a map or a nation’s charters. The Principality of Seborga’s legal ownership has been in doubt for centuries. The 14km “nation” has taken it upon itself to come up with its own currency and offers tours. Sealand, off the cost of England, is located on an abandoned military fortress in international waters. It has a spotty history, complete with dodgy business dealings and an invasion by Germans.

The third group of micro nations include the weird and wacky. Molossia, located in a suburb in Nevada, ties its currency to the cost of Pillsbury cookie dough. The Conch Republic, claiming the Florida Keys, is mostly in fun but has used its power to force the US Army to ask for permission to carry on war games. The most delightful micronation though is “King” Danny Wallace‘s nation of Lovely, located in his flat in London. The creation of this virtual kingdom was filmed by the BBC in a fantastic 6 part series called How to Start Your Own Country, which includes the world’s catchiest national anthem. Though the nation seems to be dormant, it was a truly lovely idea.