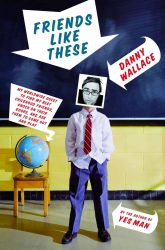 The rise of social media makes the idea of losing track of friends seem a bit quaint. But even if you are “friends” with some of your former classmates, co-workers or other pals on Facebook or Twitter, its not the same thing as seeing them in the flesh and having a real, long conversation.

Author and comedian Danny Wallace found himself alone and adrift one summer as his two best mates left town and his wife landed a plum, though grueling, job. Puttering around his new house doing DYI just wasn’t cutting it. But, by chance, his mother had sent him a box of his old things including his childhood address book.

Wallace soon turned his book into a funny and sweet adventure to reconnect with a dozen of his best friends from his school years. Encouraged and heartened by a first meetings with old friends living in his former hometown, he strikes out to find the others. As the quest expands, Wallace finds himself traveling to Germany to find an old friend, to LA to prank another mate, writing numerous emails to a dozen men with the same name as another former friend and even slogging through a Japanese rice field in the rain in search of another.

Wallace writes a touching and also hilarious account of his attempts to reconnect. Here’s a man who’s not afraid to go out and (re)make friends!

My mum has a way of inventing names for me that have never before been said to anyone. Her strong Swiss accent somehow makes them sound quite sensible, and she says them with such confidence that you wouldn’t be surprised if heads of state used the same terms when addressing each other at conventions. She doesn’t allow herself to be constrained by words that actually exist, either, creating new ones out of the ether and inserting strange Swiss German nouns. In the past few weeks alone, I have been greeted as Pomplesnicker, BimpleWicker and Bobbely. I got off lightly. My dad’s have thirty-five years of Minkleybips and Toodlebear. I’m not even sure he he knows his first name anymore.  I’m not even sure if I do.