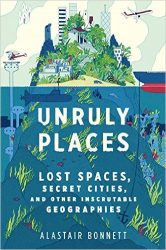 At first glance, Bonnett’s book may look like another interesting guide to off-the-beaten-track places. Unruly Places goes a step further. Divided into eight categories, Bonnett looks at truly unique geographical places and concepts. Lost Spaces include cities that have been renamed, an island that never existed and a man-made no-man’s land. Hidden Geographies focuses on the out-of-sight places, from Turkey’s underground cities in Cappadocia to squatter communities in cemeteries. No Man’s Land looks at boarders, unclaimed land and even traffic islands. Dead Cities includes show cities built by North Korea and China and the doomed city of Pripyat, decimated by Chernobyl. Spaces of Exception includes the Geneva Freeport, home of a massive warehouse of riches, FARC-Controlled territory in Colombia and even Gutterspace. Enclaves and Breakways talks about micronations and strange bits of overlapping or interlocking territory. Floating Islands looks at natural and man-made islands, utopian and otherwise. Ephemeral Places looks at transient sites that change with the population.

All of the locations (and non-locations) ask serious questions about boarders, sense of place and human attachment. While some of the spots in Unruly Places may interest the reader to visit them, most are not accessible or at all hospitable. This doesn’t make them any less fascinating. Unless you are an armchair traveler of extreme experience, it is doubtful you will have heard of more than a handful of these locations… and even less likely to have visited any. A truly intriguing book.