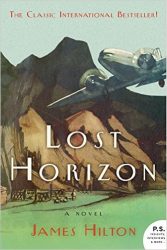 Published in 1933, Lost Horizon, came at the twilight of the great, grand, adventure books, like  its predecessors, including Jules Verne’s Journey to the Center of the Earth and The Lost World by Conan Doyle. The tale is an enjoyable fantasy of normal, everyday folks ending up in a magical, foreign place which can never be found again. Spoiler alert:  no dinosaurs. Sorry. However, there is a mystical, hidden valley with ancient monks. “Shangra-la” is now a common term that has worked itself into common vernacular; from bungalows to pizza joints, every town has one. But it was actually a places invented for Lost Horizon.

Despite the publication year, there was very little of the casual racism so often found in pre-1950s titles except by characters exhibiting their unpleasant sides. The book claims to hold the distinction of being the first paperback novel (which may also give you an idea of target audience). A fun, easy read. And who can resist a book with such a romantic passage on the first page?

We had a good view of the big Luft-Hansa machines as they arrived at the aerodome from all the parts of Central Europe, and towards dusk, when arc-flares were lighted, then scene took on a rich, theatrical brilliance.