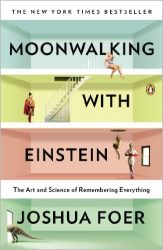 Journalist Joshua Foer had no idea he’d being going down the rabbit hole himself when he first covered the U.S. Memory Championships. The contest, not one to draw large headlines or ecstatic crowds, is still an intense competition. Participants must memorize the order of a random decks of cards, an unpublished poem, the names and faces of dozens of strangers and lists of words. All must be done with only seconds to see each card, word or face. Partially due to Foer’s professional interest and partially due to a few participant’s interest in Foer as a potential protegee, he decides to train for the next competition.

Moonwalking with Einstein isn’t just about Foer’s own experience. Over the year he investigates the best and worst memories in the world, from a man that can’t remember the previous sentence to Kim Peek, on whom the movie “Rain Man” was based. Foer has his own memory studied at the beginning and end of his training. He learns the tricks, the tips and the techniques that allows average, ordinary people to memorize hundreds of apparently random things. Like Dorothy, once you look behind the curtain you may sense a bit of a let down. But then, there is the exciting possibility that you too can remember every phone number or name you come across.

Of course, training your brain takes work and dedication. Foer, while certainly dedicated, never loses his sense of humor over the overall absurdity of the situation. “I found myself sitting on a folding chair in the basement of my parents’ home at 6:45 am, wearing underpants, earmuffs, and memory goggles, with a printout of eight hundred random digits in my lap and an image in my mind’s eye of a lingerie-clad garden gone (52632) suspended over my grandmother’s kitchen table. I suddenly looked up, wondering – remarkably, for the first time – what in the world I was doing with myself.”