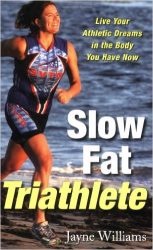 Williams describes herself as “nearly asteroid sized and shaped” when she decided to start running. Within two years she was competing in her first triathlon. She freely admits that yes, she is fat and yes, she is slow. But she also competes and has a great time. She pokes fun at herself as she sprays down with Pam to get into her wetsuit and mentions that her sprint and jog look virtually identical. There’s a 95% chance I won’t be doing a triathlon anytime this decade, but Williams’ book was a funny and inspiring read for anyone wanting to get off the couch and try something new. Yes, she says, you’ll look like a fool while you’re doing it, but at least you’re out there doing something fun. Great attitude, super funny inspiring book.