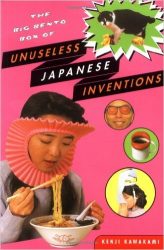 Kawakami is billed as ” the inventor of the concept of Chindogu and the founder of the 10,000-member International Chindogu Society.’ And what, may you ask (and you may) is Chindogu?

Chindogu is the concept of an invention this is almost, but not entirely, useless. True chindogu cannot be patented or sold, even as a gag gift. They are created simply on the idea that it would be useful to have, though once created, the complexity, size or other element of the invention renders it nearly useless. Take, for example, umbrellas that clip to your shoes to keep them dry. A nice idea. However, to offer maximum coverage, each umbrella is 30 cm wide – forcing the wearer to shuffle with their legs spread so they don’t knock into each other.

Umbrellas play a large roll in the vast majority of chindogu – doubling is tripods, hats, full-body covers and grocery bag racks. Other popular inventions focus around the subway (suction cup hats to hold your head up while you sleep and hard-hats with your station printed on them so you can be woken), cooking (rubber gloves with blades or sponges attached to the fingers) and personal hygiene (a mirror with fake hair around the edge so you leave home feeling attractive and hirsute, metal teeth covers for eating so you don’t get your teeth dirty). Really messed up stuff from a very messed up people. It almost makes us look normal… almost.