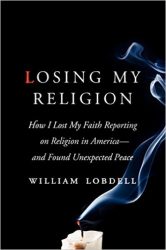 Lobdell’s journey from non-belief, to fervent Christianity and back again is a surprisingly rational one. With his life falling apart on all fronts, a young Lobdell’s friend and mentor suggests he give Christianity a try. Following a conversion at a retreat, Lobdell reorders his life and soon finds the success and peace he had been searching for. As a journalist, he turned his newfound faith into a living, writing a religion beat. After years of covering upbeat stories of folks whose faith carried them through the worst life has to offer, Lobdell found himself covering the numerous accusations against the Catholic church. As afraid as he was to proclaim his Christianity he again found himself afraid to admit to others, and himself, that he no longer had faith in a god. Tightly written, introspective and gripping. An excellent book written by an excellent journalist.