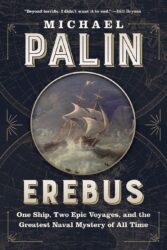 If Michael Palin, of both Monty Python fame and former president of the Royal Geographic society, turns his eye to a topic, you know it will be good. The Erebus and Terror are two ships that have gripped the imagination for over a century. The two old warships were “tubs” in the most literal terms, as they looked like deep floating bathtubs. Built not for speed but strength and endurance, they were the ideal ships to send in an expedition to map the South Pole.

Their adventures, captains’ notes, discoveries and disasters were amazing and dire enough to fit a Hollywood movie script. However, because of their success and despite their increasing age, the Erebus and Terror were seen as the ideal ship to head north to find the Northwest passage. There the ship slipped into history. The subsequent rescue effort lasted years. Like the mysterious disappearance of Percy Fawcett, tattered remnants of the crew and their Captains Crozette and Franklin would occasionally be found. But not until 2016 were any sign of the ships discovered.

Palin’s detailed book paints a lively portrait of life crammed on a research ship. The ship needed to store supplies and materials to last three years and meet every need and emergency, from ship repair, scurvy, scientific survey and research, and entertainment for the crew. From one desolate location to the next, the dedicated men (and likely a few women in trousers) surveyed wild and dangerous lands. A captivating look at polar exploration. Palin makes the captains and crew into fully realized people who lived, and died, on their mission to go farther and see new lands.