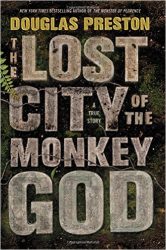 Preston, part of the writing duo of Douglas Preston and Lincoln Child,  have brought us so many exciting titles: Utopia, Relic, Riptide, Thunderhead and all the fabulous Special Agent Pendergast stories (including the hair-raising Still Life with Crows). Now Preston brings us his own, real adventure into the dark of the jungle.

In many ways, Preston’s book is highly reminiscent of David Grann’s Lost City of Z. Both authors become enthralled with tales of lost cities, deep in the Amazonian jungle. With a whole lot of personal research, but little field experience, they set off to find if not the cities themselves, at least the base of the legends. However, where their stories differ is the matter the exploration party. Preston’s party is a large, well-funded group with rich backers and the blessings and support of the Honduran government. And, unlike many swashbuckling jungle adventures, they find their lost city with the latest modern technology.

There is, of course, plenty of on the ground slogging through rivers and slashing at undergrowth with machetes. The cities found are beyond belief. Deep in wholly unmapped and almost impenetrable jungle, massive civilizations once lived. Preston and team spend only a few weeks there, but the city complexes they found will most likely take a century to fully uncover.

Like many explorers into the unknown, the team does not come back unscathed. Many of the group suffer from strange, terrible ailments that baffle all but CDC doctors. An exiting, well-rounded look at jungle modern jungle archeology with plenty of great stories, adventure and exciting moments.