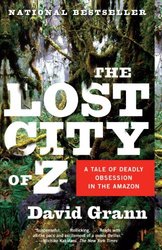 This trio of true adventure books are completely gripping. The Lost City of Z, written by New Yorker columnist David Grann, chronicles his obsession with Victorian explorer Colonel Percy Fawcett. Trained by the Royal Geographical Society in London, Fawcett undertook numerous trips exploring the Amazon basin. Based on pottery fragments and stories, he became convinced there was an enormous lost city he called “Z” somewhere in the Amazon. Aging and nearly destitute, Fawcett is given one more chance to find the city. Traveling only with his son and son’s best friend, the three disappear into the jungle, never to be seen again. Numerous attempts to find Fawcett have been made throughout the years, resulting in over 100 casualties.

Following new clues in letters Fawcett had written to family, Grann attempts to find Fawcett’s trail himself. Switching between Fawcett’s story, Grann’s attempt and other attempts at finding the city, Grann presents an intriguing look into the Amazon, its residents and lost civilizations.

The River of Doubt contains many of the same elements in The Lost City of Z. After losing his third presidential bid, a downhearted Teddy Roosevelt accepts a lecture tour of South America. His carefully planned trip down the Amazon quickly falls apart when Roosevelt decides to instead explore an unknown Amazonian river, known only as The River of Doubt. While the party was lead by the highly able explorer Candido Rondon, founder of the Brazilian Indian Protection Agency, most of the rest of the group were poorly chosen and inexperienced. The group is plagued by sickness, loss of boats, tons of useless baggage, near starvation and attacks by natives. This is a gripping all-nighter!

While Roosevelt’s party may have been plagued by unnecessary and often useless staff, Kira Salak travels completely solo. Four Corners comes from an odd angle. While she is a writer, she is not a journalist. She travels into dangerous territory and seeks out stories not as writing fodder but as a way to prove to herself that she can. Repeatedly she gets herself into narrow scrapes, often risking her life in hopes of having some epiphany on her life and feelings of worthlessness. Beyond the strange emotional waves that Salak rides, the book is an honest narrative on the joys, fears and dangers of a single woman traveling in third world countries. Her adventures are often ill-advised to the point to stupidity, but they are nonetheless fascinating. Traveling through Papua New Guinea is an adventure of great daring for anyone. Kudos to Kira for doing it, whatever her motives.