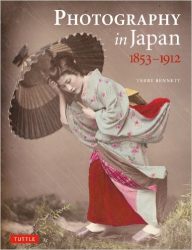 The actual text of this book is dull beyond words. It chronicles the various European photographers who first photographed Japan, along with later European and Japanese photographers and their studios. Yep, dull.

The images are magnificent. They show an exotic and beautiful world, now long gone. Narrow winding streets, geisha in full kimonos, castles with rice-paper windows and samurai in their mustached helmets are captured as their country is being engulfed by the west. Check out this marvelous website for some of the images: http://oldphotosjapan.com/en/