The Bizarre and Disturbing Adventures of Hitler’s Limousine in America 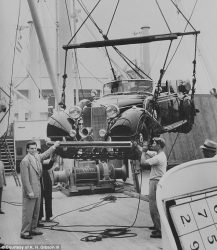 hree generations after the Holocaust and WWII, Hitler still has the ability to fascinate and repulse us, as does nearly anything even vaguely related to him. His (or possibly his) car (or possibly cars) are no exception. Unswervingly loyal to the Mercedes brand, Hitler ordered a flotilla of hand-built Mercedes 770K Model 150 Offener Tourenwagen. These massive behemoths were 10 tons, seated eight comfortably, and took seventeen steps to get running. They came with special features, like hidden gun caches, crank-up metal shields and a platform for Hitler to stand on to make him appear taller. Most ended up in a general officer’s motor pool, while many others were given as gifts to other heads of state.

After the war, a number of these cars were captured by the Allies and sent back to the US. Many instantly were tagged “Hitler’s” (or Goring’s) personal cars. The massive, midnight blue beasts with their bulbous shapes and shining, grinning fenders were instant attractions wherever they went. 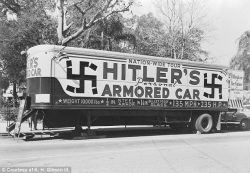 The first car made public was one sent to import/export trader Christopher Janus on some bad debt. Naively, he decided to take the car and use it as a fundraiser for the war relief. The car did raise substantial sums of money for various war torn areas. But over time, the notoriety of the car became too much and Janus sold it.

Other cars appeared in America and followed similar paths. In the early years, they were used as fundraisers – a thumbed nose toward the Nazis, prizes meant to show our victory. But as time passed, the cars became…more. They sold for more, the faked back-stories more outlandish and the owners thrust into an often uncomfortable spotlight.

Author Klara does a wonderful job following a handful of these cars, attempts to prove their provenance, how the cars affected various owners, and where these special few cars have ended up.

He also delves into the murky waters of evil and inanimate objects. Is a car that was owned by Hitler “evil”? How about one he only rode in a few times? Is a car more “evil” than say a hand-towel from Hitler’s Berghof?