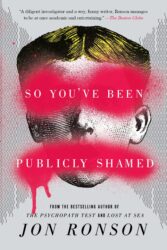 Author Johnson, is best known for his book The Men Who Stare at Goats, later a Hollywood movie. His other books are no less far afield and equally fascinating, including The Psychopath Test. So You’ve Been Publicly Shamed, published 2015, is the book of the moment. At a time of mask shaming, vaccination shaming, Karen shaming, police brutality shaming, and with every citizen armed with a camera in their phone, society has turned on one another in an orgy of recrimination. Johnson’s fascinating book follows a handful of people who have been rightfully shamed, or arbitrarily attacked and made a poster child (depending on your view point). Some people did do or say terrible things. But others just seem to have misspoke or acted like, well, humans.

Should these people be digitally tarred and feathered for life? Is it cruel? Is it justified? Can we, the outside public, really discern what is going on based on the tiniest sliver of information? What happens when you want to reclaim or life or name online? Johnson’s book is a fascinating case study and look into one of human societies oldest and most effective punishments.