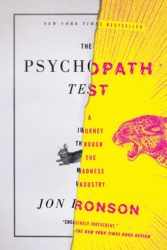 There is something utterly gripping and fascinating about psychopaths. The idea that someone is without morals or compassion, no internal brakes, repels and intrigues us. What if we didn’t have that little voice in our head telling us not to do something? What if we could do whatever we wanted?

Ronson, author of The Men Who Stare at Goats, becomes intrigued with what he calls “the madness industry” after meeting a neurologist who had received a very odd book in the mail. With some research, they found dozens of people all over the world had received this bizarre book filled with mysterious messages, codes and pages with words cut out. The production quality of the book was quite high and it would have been a costly job to produce. Why them? What did it mean? Ronson, intrigued, is sucked into world of sanity, insanity and the often indefinable line between.

Like Kevin Dutton, Ronson feels the urge to meet and interview those deemed unfit for society. Some have committed heinous crimes. Both others are incarcerated simply because of strange things they have said. Are they mad? Are they dangerous? Or are they simply poor saps who are caught in a web they can’t get out of?  Who really can tell what is going through another’s head? By what metric should they be judged? A gripping, intriguing and a rather disturbing look at mental health.