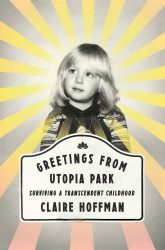 As far as cults go, the Maharishi’s Transcendental Meditation (TM) community was, and still is, pretty benign. In fact, author Hoffman goes to great pains to avoid calling the group a true cult. There are plenty of the hallmarks though – separating members from the larger community, a very top-down leadership with the leader having a final say, anyone questioning “teachings” being asked leave, etc.

Hoffman’s mother moved the family to the strangely situation TM community in Fairfield Iowa after a nasty breakup with her husband. A longtime devotee of the Maharishi (formerly the Beatles’ spiritual leader) and  meditation, thi small community was to offer the family a fresh start with like-minded people. Like the Hassidic Postville, IA community (a mere three hours away), the Maharishi’s followers stood out among the rural residents. Bouncing between the private TM school and the public school, Hoffman and her brother never really felt like they fit in. As they grew older, they also began to question the teachings, which included exclusive (and very expensive) flying lessons. As much as this is a story about growing up in a quasi-utopian/quasi-cult, it is as much a story about not fitting in.

In the end, Hoffman made her peace with her childhood and has returned to TM as part of her life, despite the book’s subtitle “Surviving a Transcendent Childhood.”