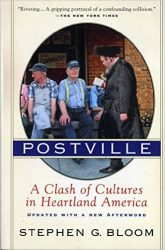 People are weird. Society just amplifies our weirdness. Take us out of our normal microcosm and dump us elsewhere, and we can be aliens to our own race of humankind. Postville is, or was, a sleepy little farming town in Iowa. A dinky, inbred but friendly burg, much like the one I grew up in. In 1987, this all changed. A group of Lubavitcher Hassidic Jews bought the rendering plant outside the town and set up shop to become on of the largest kosher slaughterhouses in the world. And all hell broke loose. On the surface, it seems like a battle between us and them. The newcomers rudely swarm into town. Instead of starting at the bottom rung, like most “immigrants”, they instead installed themselves at the top of the food chain. On the other far spectrum are the usual small-minded anti-Semites. However, it is those in the middle that make for the most interesting read. Many of the residents of Postville initially welcomed the Jews and the slaughterhouse. They were friendly and outgoing, inviting the new neighbors over and enthusiastically supporting the new jobs created. This changed in a short time.

Stephen Bloom, a very reform Jew (please pass the bacon, thanks) and a professor at Iowa U was the perfect author for this book. Describing his own discomfort with being a Jew out of water (?) in a small town where it is assumed everyone is a Christian, he eagerly drove out to Postville to meet some of his own people. What he found was a brewing battle between the residents of Postville and the Lubavitchers. The townspeople told him of their dissatisfaction with the Jews – they didn’t mow their lawns, parked their cars in the middle of the street or drove on the sidewalk, tried to haggle in stores – but most importantly, weren’t neighborly and rebuffed all attempts at friendship. At first, Bloom is convinced that this is a vein of anti-Semitism. He goes out to meet the Lubavitchers. In short order, the owner of the plant tells Bloom that he waits way past due dates to pay bills, doesn’t want anything to do with the townspeople and is irritated that they don’t understand the obvious superiority (both financially and religiously) of their community. Fascinated by the increasing dissatisfaction, Bloom follows the workings of the town as the townspeople decide to take action and vote to annex the land the slaughterhouse is in, in hopes of driving out, or at least controlling, the Lubavtichers’ operations. A really excellently written book, balanced and tight. Bloom’s own story and position make it all the more interesting.