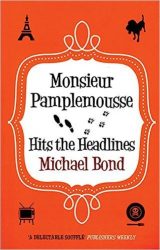 Does the name Michael Bond ring faintly familiar in your head? It should. Bond was the creator of the Paddington Bear books. Apparently Bond decided to free himself from a sea of marmalade and give mystery writing a whirl. Who can judge a book by its cover? I can. This one was shiny and red and had a picture of a dog on it. Works for me. While the plot of Bond’s “mystery” is gossamer thin to start, and merely vestigial by the end, the books is still thoroughly enjoyable. The fourth in a series, Bond’s Monsieur Pamplemousse (Mr. Grapefruit) and his dog Pomme Frittes (French Fries) bobble along merrily through France, not really solving crimes. The main focus of the book is instead the heart of the Gaelic world – food. Paragraphs and even pages are devoted to long, loving conversations of French cooking and in turn, France and the areas where various foods are produced. With occasional forays into discussion of French culture and Paris architecture, this book is thoroughly enjoyable with the most minimal brain functions needed. Perhaps the next one will involve less of that clutter called plot line and just stick to the important stuff – creating the perfect tripe pie.