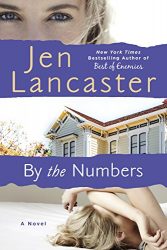 Lancaster’s switch from snarkily funny autobiography (Bitter is the New Black, I Regret Nothing) to fiction has been highly successful and incredibly satisfying. Admittedly, her inspiration comes from the same well – nasty women in the burbs getting life lessons in a hilarious, if sympathetic, way.

By The Numbers is the story of a highly successful actuary, Penny, with spoiled brat daughter fast blooming into a wildly expensive Bridezilla. As she tries to cope with the upcoming wedding, other parts of her life unravel – another spoiled daughter, her ex-husband and his young girlfriend, her domineering parents moving in and a co-worker angling for her promotion. Penny manages to stagger through one hysterical crisis after another, though at times burning the house down seems like the best solution. Thoroughly enjoyable and a great escape into Someone Else’s Problems (despite the ill-fitting cover art).