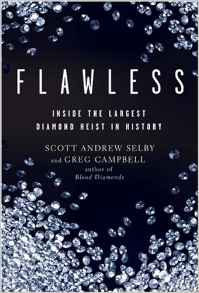 There is something to strangely romantic about large thefts. From Colonel Blood to the Ocean’s movies, we just can’t help but say “Oh, good show.” Perhaps it is the immense amount of planning and sheer brains needed to pull off some of these major heists.  Coupled with a little schadenfreude and a soupçon of jealousy, reading and fantasizing about what we’d do with a cool million or two of illicit cash is so tantalizing. Like The Man in the Rockefeller Suit , Catch Me if You Can and  Sex on the Moon, this is a very true tale about the world’s largest diamond heist. While it doesn’t have any of the standard Hollywood shoot-em-up scenes or double-crosses we’ve come to expect (it is, after all, real life), it does lay out the sheer guts and planning needed to succeed. Combined with lax security, far too much reliance on technology, simple “headology” and some specially invented tools, a group of thieves known as the School of Turin made off with an estimated half-billion dollars. To this day, almost none of it has been recovered.