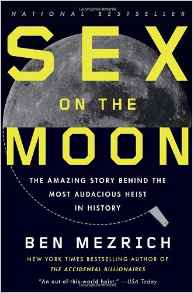 I’m tempted to add a new category for books called “what the hell were you thinking?” Mezrich, author of The Accidental Billionaires (later made into the movie The Social Network) never seems to come close to answering this question.  Sex on the Moon chronicles the brief rise and spectacular fall of Thad Roberts.  Within a few short years of   being thrown out of his crushing Mormon family, Roberts finds himself working at NASA.  Driven by an immense desire to be an astronaut, Roberts flies through a triple major, extra-curricular groups and anything else he can do to increase his changes of someday walking on Mars.  He is rewarded with an internship-type position at NASA.  Then, mysteriously and so very close to a full-time job, he decides to instead instigate a major heist of moon samples potentially worth billions.  While Mezrich certainly speculates elaborately on Roberts’ motivations, and does interview him also, Roberts’ actions never do seem convincingly or clearly explained.  Rationally, risking it all for a year’s salary and a girl who is already firmly enamored just don’t seem to add up.  Puzzling, tense and, if nothing else, a hell of a good story.