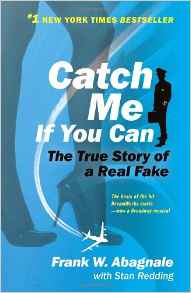 The movie version of Catch Me If You Can is exciting and fast-paced, with plenty of Hollywood glitz that adds a glossy veneer, making many of Frank Abagnale’s exploits seem fake and overblown.  While enjoyable, the movie doesn’t begin to compare to Abagnale’s descriptions of his short but highly lucrative life of crime.  With a wickedly quick mind, Abagnale kept one step ahead of the FBI by continually changing his strategy and learning new cons. While almost all were based on cashing phony checks, the complexity schemes grew by leaps and bounds.  Many of his earlier attempts at passing bad checks would, and should have been, caught.  However, like “Clark Rockefeller” Abagnale also understood the importance of pretexting.  Mythology tells of fairies being able to cast a glamour over men’s eyes, confusing them and muddling the mind.  In the modern day, our own tricksters use costume, speech-pattern, warm smiles, props and plenty of eye-contact to cast the appearance of sincerity.  Some of Abagnale’s cons seem so patently fake that it almost unbelievable that anyone would be so gullible as to fall for them.  Others are so shockingly brash they seem almost admirable for their audacity.  Abagnale’s final capture and punishment, meted out with unbelievable cruelty, are  a crash to the earth.  You’ll shake your head in wonder at the chutzpah all throughout this unbelievable narrative.