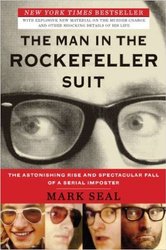 “The bigger the lie, the more it will be believed.” – paraphrased from Joseph Goebbels

There is something simply unbelievable in the stories of serial imposters like Frank Abaganle and “Clark Rockefeller”.  How, you ask yourself, could so many people possibly believe such twaddle?  And yet they do.  Far above the class of metal-siding salesmen, these world-class liars create entire personas for themselves.  Their tightly woven stories, embellished with the most garish and outrageous of stories, are costumed and acted day and night.  The mask never slips. When someone gets too close, another mask is made in its place. While most imposters create their new selves to acquire wealth and power, in the case of German Christian Gerhartstreiter the mask was also there to make himself into the person he felt he “should” (and deserved to)  be.  With a sharp mind, accents learned from American movies and one over-the-top story after another, Gerhartstreiter made himself into an orphan child of a minor branch of the fabulously wealthy and famous Rockefeller family.  From one coast to another, gullible “friends” bought into his story. Was it just in the hope of a bit of magic dust rubbing off?  Or did they truly believe?  “Rockefeller’s” life  twists from one lie to the next, sliding from one rich enclave to another – always evading the attempts of the CA police to question him about a murder and missing person case.  One heck of an unbelievable story. Hollywood could never come up with something like this.