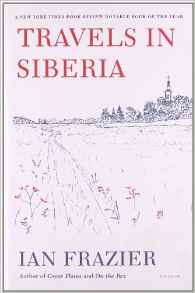 Frazier’s dense and fascinating look at Siberia from seven trips over two decades makes a nowhere place into somewhere.  Most often associated with gulag camps and cold, Siberia is as as vast and varied hunk of land as the US.  Starting with his early fascination with the country, Frazier recounts his earliest forray into Siberia and his decision to mount a full-scale trip.  The seven week drive across the country shows both beautiful country and the ravages of an ugly past – from the Mongols to Communism.  His accounts of the residents, food, swarms of mosquitoes and their ever-dying van make the trip into an adventure. A fair amount of Russian history is mixed in, though without the tedious rote of a textbook.  In later trips, Frazier marvels at the changes, not always positive, that glasnost and oil money have wrought on Siberia.  However, his trip in winter shows one thing never changes – the cold. Siberia is far too enormous to describe in any one account, but I think this book does an excellent job giving you a reason to be interested in further reading.

As a side note: keep a list of places in mentioned in the book, then check them out in Google maps.  There are some wonderful photos but also some places that are so vastly devoid of human habitation that it feels like a glitch in the system. How can there be so much…emptiness?