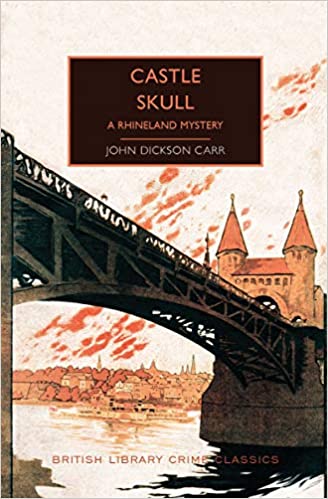 Dickinson Carr is considered one of the classic “vintage” (though possibly second-tier) mystery writers. He’s up there with likes of Pim, Tey, and Marsh. But if Castle Skull sounds like the title a seventh-grader would give their first novel, you wouldn’t be far off. There is nothing subtle or redeeming about this mystery. It is the literary equivalent of a chocolate covered marshmallow…and just as delightful.

Our hero and side-kick Jeff Marle accompanies the famous French detective Henri Bencolin to look into the horrific murder of famous actor Myron Alison. They travel down the (dark and shadowy) Rhine river to stay with the (loud, cigar smoking) sister of the murdered man. From the (gloomy) Alison house, they can see Castle Skull (dum-dum-DUUUUM) across the water – an ancient castle shaped like…a skull! It was here Alison died, on the ramparts of his old friend the (mysterious and creepy) magician Maleger. There rest of the cast comprises the usual suspects – the arch young flapper, the German detective with the monocle, the bumbling local constable… They’re all there. The whole thing is ridiculous, implausible and the most wonderful distraction. If you need to be taken far, far out of reality, you can’t go deeper afield than Castle Skull.