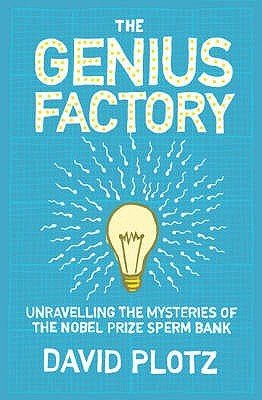 The story of The Nobel Sperm bank is as bizarre as its title. Wealthy inventor Robert Graham was semi-retired, but looking for a passion project (for lack of a better term). He believed that intelligent people would produce intelligent, nay, genius children. There were too many idiots dragging society down and we needed to cull the dummies out. Not, as some of his biggest supporters suggested, by sterilizing the unintelligent. But by out-breeding them. He felt this was a kinder, gentler way of producing the (white, American, Christian) ubermensch. Problem is, most Nobel winners thought he was a crackpot.

Still, Graham soldiered on, getting “donations” from the smartest and fitted (by his definition) men he could. He’d court and flatter them, then whip out a container at the first sign of weakening.

Many women were attracted to the idea of having a smart child. The bank did result in hundreds of babies being born, despite only a handful being “Nobel” progeny.

Author Plotz delves into the strange and often darkly amusing history of the bank. He also met with, and followed, the lives of a handful of the Nobel babies. With they, and their mothers’ help, he tracked down and met a handful of donors.

While often funny or bizarre, Plotz’s story is also poignant, sad and sometimes deeply heart-warming. An interesting look at the effects of a new and fantastic technology on real-life human beings.