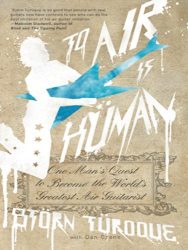 We saw the transcendent movie Air Guitar Nation at this year’s Madison film festival. Despite the International Air Guitar Championships existing for over a decade, an American had never competed. The makers of Air Guitar Nation follow the first two American contenders – C-diddy (the Asian fury) and Björn Töroque. The credits mention Björn’s book, so of course I had to pick it up. Sometimes funny, often kind of sad and pathetic, Töroque explains his interest in competing in air guitar, his inexplicable burning to win and his dissatisfaction with his real career and life. While Töroque often comes off petulant and jealous in the movie, his book is very human. Anyone reading it can understand the desire to be the best at something, especially when the rest of life seems so tiring and mundane. ROCK!