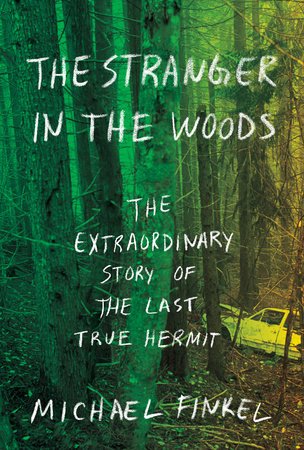 Ever had one of those days where you simply want to walk into the woods and just…disappear? Chris Knight, the most notorious hermit in modern times, did just this. One day he simply walked into the woods, and remained there for 27 years. His sole conversation with another human consisted of the word “hi”.

While the solo life suited Knight, he didn’t have many of the skills, or tools, to lively solely off the land. Instead, he burgled the vacation homes ringing the lake where he lived. Over the years, he broke into an estimated 1,000 locations. It was these thefts that lead to his eventual arrest and return to society.

Author and journalist Michael Finkel became intrigued with Knight’s story and the entire concept of becoming a hermit.  Over a period of months, he struck up not quite a friendship, but a tentative sympatico with Knight.

Through a series of letters and a few in-person interviews, Finkel tries to piece together Knight’s reasoning, his years in the woods and what future he has in the modern world. He visits Knight’s camp, which is both surprisingly complex and remarkably close to civilization. Through what interviews he can obtain (most family and few neighbors will talk to him), Finkel tries to piece together the “why” of Knight’s decision to check-out from the modern world.

A thoroughly engrossing read. Though be warned, there are few, if any, answers provided of Knight’s reasoning. As he says himself, he has no wisdom or koans to provide.