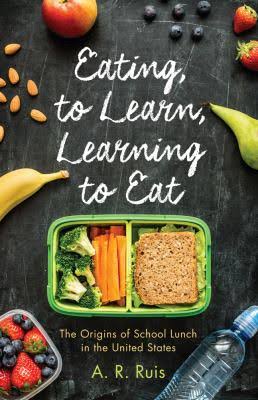 The Origins of the School Lunch in the United States

Ruis’s book, adapted from his PhD  thesis, gives a detailed overview of the history of U.S. School lunches. Attention to health and malnutrition in children started coming to the fore in the late 1880s. Schools found that their students often ate incredibly poorly –  due to poverty, lack of nutritional education and few options. Most school lunches were initially run by local charities, with varying degrees of success.

The 20s and 30s saw a huge increase in school lunch programs with the start of some federal funding and oversight. However, the first waves of criticism also accompanied government involvement.  Many legislators felt that helping with subsidized lunches was “socialism” and would cause dependency on the government, despite strong testimony from school administrators and parents on the increased health of their children.

The has battle waged back and forth for decades since. Nutrition vs. a place to dump overabundance of produce (onions and grapefruit from lunch, anyone?), equality vs “separate but equal”, federal funding and oversight vs parental and/or local control, a healthy population vs  personal choice.  (I felt the last chapter “From Aid to Entitlement” could easily be called “So Many Politicians are Awful People.)

Well written and very well researched, this book gives an in-depth, multi-faceted look at a topic many of us have rarely considered.

Full discloser: The author is a good friend of mine, and editor of my book The Devil’s Advocate’s Guide to Planning Your Website.