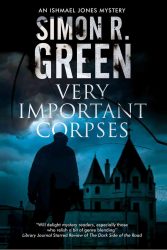 Green, author of the fabulous Nightside series, has a new …”hero.” Ishmael Jones is an alien, crashed on the Earth decades ago. With no memory of who or what he is, but endowed with all sorts of handy strengths, he works for a secret organization protecting the world from ghastly things. In return, they protect his identity. And, for some inexplicable reason, all of his jobs seem to end up in creepy old mansions in the back of beyond.

Unlike the Nightside series, set in its own other hidden world, the Ishmael Jones series combines some of the most enjoyable elements of (trashy) fiction:

“Polar bears always raise one arm across their face because they’re pretending to be Batman. Great fans of Adam West, the polar bears.”
― Simon R. Green, The Dark Side of the Road