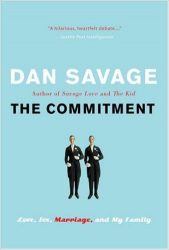 The Commitment is a continuation of Savage’s life post The Kid. Interwoven with Savage’s story of he and his boyfriend Terry’s indecision over getting married is the story of Savage’s family, gay marriage history and plenty of hilarious anecdotes. However, change the sex of one of the characters and this book would never have been published. Dan and Terry are the quintessential retro- nuclear family. Savage works full time, Terry stays home with their son and does the housework. They want another child and vacation in Michigan with family. I hope, and expect, a reader 20 years from now will be baffled why this book was ever published. Amusing, yes, but really just a book about an average family in America.