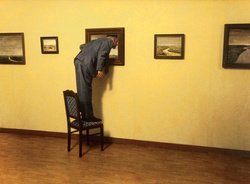 Dutch photographer/painter Hocks creates amusing and bizarre painted photo images. Portraying a generic “everyman” Hocks highlights the absurdities of life. Standing on an ice-flow, his everyman looks concernedly at his briefcase and hat as they float away. Standing on top of a ladder, he shoves his head into a painting as peers around, as though through a window. A most arresting image shows a watering can next to a small sapling. A long rope ending with a nose trails on the ground from the tiny sapling twigs. Sly, witty, sad and surreal.