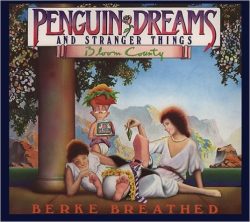 As a refreshingly amusing and light read, I have been plugging away through a bunch of collections of Berk Breathed’s comics. I’m amazed at what an excellent barometer of popular culture and politics Breathed’s (the creator of Opus and Bloom County) comics are. In particular, the Penguin Dreams proves the adage of “same ol’ same ol.”  Originally published at the end of the Reagan era, the comic touches on being a liberal in a conservative world (liberal commentators screaming “VOLVO!” on a talk-radio show), the Jews hating the Arabs hating the Christians hating the secularists hating…, snarky commentary about no fan in their right mind waiting 15 years for a Star Wars sequel and needing to just go sit in the dandelions for a bit. Funny, articulate and amazingly clear-visioned. Ack!