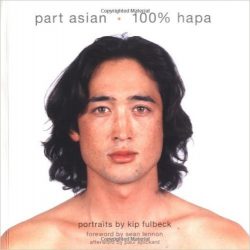 I saw this little gem in the pop culture rack a few weeks ago and couldn’t resist snagging it, despite my already precariously towering heap. Fulbeck’s collection is a photo essay of hapa – people of part Asian, part “other” descent. The most recognizable hapa in American pop culture is probably Keanu Reeves. However, Reeves only gets one mention on the commentary cards that accompany the images filled out by the hapa subjects “Many of my ex-girlfriends were habitual half-Asian daters. Theses women considered half-Asian men ‘exotic’, ‘sexy’ and ‘just-like-Keanu Reeves-in-the-Matrix.’ I consider these stereotypes appropriate because I got laid.” – a hapa man of Japanese/German/Romanian/Russian descent. Many of the subjects photographed in the collection to have the beautiful and exotic look that mixed-descent folks have. A few look truly bizarre, though not in a tangible “Oh look he has three nostrils” sort of way. The personal comments are equally fascinating. Some indicate they love their mixed looks, others feel that they never truly fit anywhere. Comments range from the deeply introspective and heartfelt, others are light and silly “I’m a grown man who just exposed my breasts to a complete stranger” says one large Hawaiian/Chinese/German man. A good Sunday brunch read to share with a group of friends.