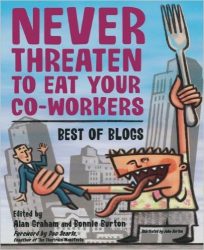 “Race and gender relations have come a long way in this country. When Condaleeza Rice was a young girl, who would’ve thought she would one day grow up to be a white man?” – J Dorchen

To tell the truth, I rarely read blogs. Sitting in front of a computer for fun, after sitting in front of one for work all day, really does not appeal. However, I think I may start reading a few of these gems. Graham and Burton culled some 30,000 blog entries from thousands of blogs to come up with this best of. There is no particular theme – simply people’s personal comments on their blogs that are funny, insightful and intelligent. Bloggers range from the infamous Dooce (for whom the term “getting Dooced” was coined), known best for being fired from her job after the management found she had blogged about her job. Others include; hilarious stories from Defective Yeti, comments on the joys and pains of being a married mother from Mrs. Kennedy, snarky, witty commentary on life in New York from Choire Sicha, comments on the war in Iraq by Christopher Allbritton and True Tales of a Porn Store Clerk, written by Ali Davis.