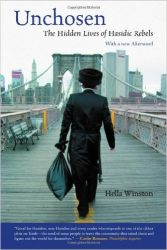 I LOVE books on insular, orthodox religious groups. No idea why. They just fascinate me – Amish, Hutterite, Hasidim, Mormons. Why? Perhaps, as Winston points out in her introduction, we are both fascinated and revolted by the idea of living in such a close-knit, rule-ridden community because of the complete “otherness” of this life. On one hand, to live in a closed community can seem so appealing. You know your path in life, the rules are clear and easy to follow. Live a good life and support and a marriage partner are virtually guaranteed, as is a job and a home. On the flip side, any deviation from the lifestyle is not tolerated. To be one of the “chosen” is a great burden and contact with the outside world is guaranteed pollution of the mind.

Winston follows a group of Satmar Hasidim (a sect of Orthodox Judaism). Like more obvious groups, the Lubavitchers, the Satmar are a large, insular community of Jews. They follow a rebbe who rules the community. As with most orthodox religious groups, the men make the laws and the women rule the home and raise good, observant children. However, many of the members of these communities chafe against the life style and restrictions. Leaving is not easy. The Hasidim are given exceptions from education standards as they have their own schools. Most members are uneducated, extremely poor (a vast majority of the group are on public assistance), often married at a young age and many only speak Yiddish.

Winston interviewed a number of members of the Satmar, Lubavitch and other Orthodox communities. Some are perfectly happy with their lives. Others tell of leaving, or trying to leave the community, the struggles to get an education and learn English, rejection by family, problems with depression and substance abuse and other by-products of their insular world. This book is absolutely fascinating – a rare and odd glimpse into another world – Brooklyn. While many of the writer’s subjects do face huge hurdles, there are also many stories of Jews who have left the community and successfully remade themselves, often with the help of grandparents. My only beef with the book? Too darn short!