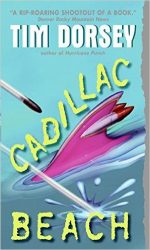 Dorsey is in one of my favorite genre of writers – wacked-out Floridian. Apparently there is something about southern Florida that produces psychotic characters and bizarre plot twists. I’m guessing it if because southern Florida is full of psychotics with bizarre lives. Dorsey’s main character, Serge A. Storms, is a raving lunatic hell-bent on writing the wrongs imposed on his beloved Florida by a myriad enemies – developers, tourists, the government, college students, various mafias and anyone else who crosses his path. With his perpetually stoned sidekick Lenny, Serge careens across Florida in a giant pink Cadillac, checking off tasks on his to-do list of delusions. 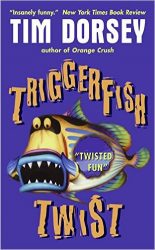 Like the works of Carl Hiaasen and Dave Barry (yes, that Dave Barry) most Florida residents are weasels (see Scott Adams) out to destroy the beloved past of Florida. However, Serge makes Hiaasen’s governor and other characters seem like model citizens and would give Hunter S. Thompson a run for the money in the crazed ramblings (mostly on the history of Florida) and insane delusions department. I wouldn’t say these books are good, per se. The move far too fast to take in much of the scenery, but they are a hell of a ride.