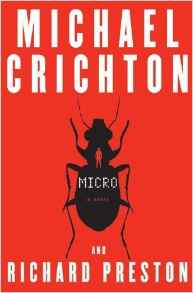 Despite being dead, Michael Crichton has managed to still write quite prolifically. The book, finished posthumously by science writer Richard Preston, has its moments.  The premise is pure old-school Crichton.  An evil tech company owner shrinks down a bunch of science grad students and they must survive in a jungle. The descriptions of the micro world from a tiny size are lovely and intriguing. Crichton/Preston provide tons of fascinating details on insects, spiders, birds and the plants of a Hawaiian jungle. Aspects of being super-small that I had never considered become excellent plot points – gravity has much less effect, bodies run through massive amounts of calories, micro people need to break the “skin” on water to drink it because of surface tension.  All these wildly imaginative points fail to make up for the characters. The grad students and other people in the book are flat, dull and lifeless.  Their descriptions are a broad list of  stereotypes with virtually no personality.  Even the attempts to add a bit of texture to various people seem cliched and tired. As they died off one by one (well of course they do, it’s Crichton) I failed to care at all about them. Read the book of the description for the micro world, but don’t plan to get attached to any of the dullard humans inhabiting it.