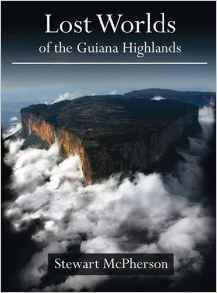 I’m guessing most viewers of the Pixar  flick  Up were convinced that the surreal, twisted landscape on the top of the mountain where the balloon-house landed were figments of overheated animators’ brains. However, based on the pictures in Lost Worlds of the Guiana Highlands, it is clear that much of the artwork was straight still-life renditions of the eerie scenery at the top of these remote cloud-shrouded mountains.  The tepuis, mountain islands shooting vertically thousands of feet into the air, have been objects of fascination and speculation for centuries.  Until the 1800s, no one had ever managed to climb to the top of the straight and treacherous mountains.  Despite their immense inaccessibility, numerous stories have been based on the tepuis. Most famously, Sir Arthur Conan Doyle (of Sherlock Homes fame) set his Lost World on the top of one of these remote mountains.  While the real tepuis don’t harbor any dinosaurs, they do have diverse and unique eco-systems, some populated with animals and plants that have not needed to evolve in millenia. Other bits of legend, such as the discovery of Angel Falls, sound like fanciful adventure  stories.  Angel Falls, the tallest in the world, were discovered by a dare-devil explorer  looking for gold.  In 1938 he spotted the falls from his tiny plane and reported back, to the wonder (and skepticism) of the world. Fantastic photos and a wonderful place to dream about visiting.