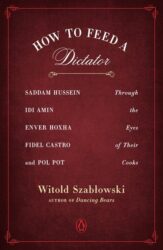 A cook is often one of the most intimate relationships a rich or powerful person may have. Both from living in close proximity. But also, the rich and powerful must trust their cook to not murder them. In turn, these cooks find themselves very well-compensated, but also watched, controlled …and always under suspicion.

Szablowski spent years tracking down cooks of the cooks to some of the most infamous and reviled dictators of the 20th and 21st century. Some were so grateful to unburden themselves of their stories. Others needed to be carefully cultivated over weeks and months. What emerges are a disparate collection of stories.

While all the cooks were clearly close to and quite intimately familiar with “their” despots, their experiences vary wildly. Idi Amin’s cook, nearly destitute at the time of the interview, considered himself lucky to escape with his life (and nearly didn’t). Pol Pot’s cook, clearly still in love with the man decades later, will not hear a word against her darling comrade. Despite being in the inner circle, and expecting to be accused of treason at any moment, she adored him until the end.

Interspersed with the interviews with the cooks, Szablowski includes information on the various dictators, their families and crimes. He describes cooking with the chefs as they build mutual trust. Many of these cooks want to show off their skill in making their former employer’s favorite dishes.

Like Dictator Style, How to Feed a Dictator gives a  peek through a small, intimate window into the ordinary parts of the lives of truly unprecedented and un-ordinary people.