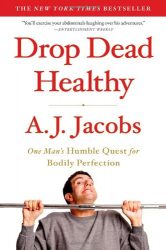 Like  his other other fantastic books, The Year of Living Biblically and The Know-It-All, Jacobs uses himself as a guinea pig to run a series of tests to improve himself. While other writers have undertaken this in a more serious vein (Gretchen Rubin’s The Happiness Project being a wonderful example) Jacobs sets out to test the boundaries between the standard recommendation and the flaky land beyond. While he does have the serious goal to improve health and physique, he has no problem giving everything from the Cave Man Diet to acupuncture a whirl.  Some of remarkable successes, others often hilarious failures. Though the reporting of each of his experiments is a bit more sparse than past books (this was a two year experiment as opposed to the single years in the past) it is still a fast, hilarious and informative read.