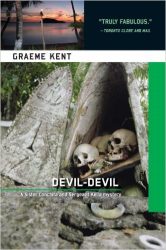 Kent has managed to create one of the rarest of novels. Set in the Solomon Islands in the 1960s as colonial rule is disintegrating, many of the bright boys are given a European education in preparation to take over control of the country. These men vacillate between their traditional village lifestyles and beliefs and their eastern education and Christianity.  Kent does the amazing job of giving a solid chunk of island history, the beliefs and religions of the various Solomon Island tribes and families, colonial attitude, the life of a missionary and much more… all without the usual tedious couple of paragraph expositions crammed in here and there.  His dialogue flows between Sergeant Kella, a police officer officially looking for a missing archaeologist, and Sister Conchita, a mouthy nun. With no effort or thought the reader soon picks up the difference belief systems and village hierarchies, what tabu is, and about past uprisings. The murder mystery aspect of the book, good though it is, really comes second to rich background Kent weaves into the story.