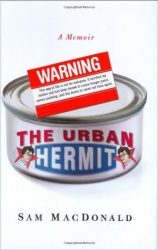 Sam Macdonald was a fat, broke failure. His social life consisted of sitting on a bar-stool all night. His apartment, he noted, was the “brownest” place he had ever lived. Mustering the reserves of a truly desperate man, he decided to go on a starvation diet to loose weight and save money. Breakfast – 2 hard-boiled eggs, lunch – cooked lentils and salt, dinner, – lentils and a white-bread and tuna sandwich. It was horrible, but Macdonald stuck it out. While he clearly warns that no one should ever eat like this or follow in his path, it did work for him. He lost nearly half his body weight, paid off his debts and saved money, got new interests and hobbies, cut back on his drinking, landed some really sweet freelance gigs that took him around the world and even met a woman who liked him (this he found perplexing). A very good read by a thoroughly likable and very honest guy.