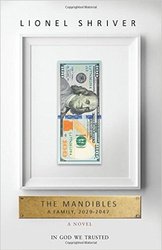 Shriver’s oh-so-plausible dystopian novel follows four generations of the Mandible family. From the incredibly wealthy great-grandfather to his granddaughter and great grandson ( barely scraping by), the family fortunes run the gamut of the economic ladder. But all are soon falling, and fast.

What makes this novel both so gripping and so ghastly is how believable the scenarios are. There is no plague that kills most of the population, nuclear war or alien invasion – just poor money management and delusional government. Neither is most of the plot a surprise. The descent into poverty is so clear and obvious; there is no other alternative. Yet Shriver’s family members are so well-written and real, the reader is buoyed along, half-wanting to know what happens and half-wanting to look away. From the entitled brat cousins, the economics professor for whom it all is all senseless, to teenager Willing (our hero), each person plays a key role in the desperate fight for survival.

It gets bad. Then, it gets worse.

This book is so engrossing and unsettling, I feel the need to provide one small spoiler alert: the dog is fine. The rest of the ride is bumpy, but you don’t need to worry on Milo the hound’s account.

Once you are finished with The Mandibles, might I suggest a few choice titles from the self-sufficiency recommendations list?