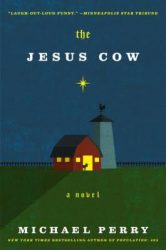 On Christmas Eve itself bachelor Harley Jackson stepped into his barn and behold there illuminated in straw a smallish newborn bull calf upon whose flank was born the very image of Our Lord and Savior Jesus Christ.

And thus begins The Bard o’ the Nort’ Woods’ book The Jesus Cow.

Like a precious few other writers (Hiassen and Dorsey spring to mind), Perry manages to weave together multiple strands of stories and characters. All seem to have a clear trajectory that you, the reader, just don’t feel quite clever enough to guess. There are good, bad and stupid people.  All are participating in actions that you know will eventually meet and cause some massive, shocking, event that in hindsight seems crystal clear..  All will be changed, for better or worse. You just need to enjoy the ride and theorize where it’ll all end.

Like the authors I term “Florida Insane” (Hiassen/Dorsey/Barry et al), Perry writes to what he knows best – northern Wisconsin. While you don’t need to be from “up nort'” to appreciate the characters and towns, their familiarity adds an additional frisson of fun, affection and maybe a tiny bit of irritation to those of us who are. This is an area where most towns “aren’t big enough” for a McDonalds. Everyone went to school together, many are related and most hold two or three jobs to keep the town running. Entertainment is mostly local and centers on the outdoors, beer, local sports and town cookouts and festivals. Everyone turns out for the fireworks.

Perhaps it is the amount open space and free time that lets people in small rural areas become “characters” (the type with quotes) or perhaps you can look more closely at people’s quirks where there isn’t so much humanity on the ground. Regardless, Perry has them all nailed. There’s the loners, the civic participants, those longing to be big fish in even bigger ponds, those hiding away from the world or themselves, the failed academics and writers, plus lots of good natured locals who could never imagine living anywhere else.

The farmer Harley’s cow, and it’s subsequent ripples on the community, play out in a (mostly) realistic way. And yet, there is the most fantastic, hilarious (and yes, inevitable) finale. This book is the sort of laugh-out-loud funny book you will find yourself reading bits of to friends and family, before stopping yourself to say “oh, but you’ve got to read this yourself!”

Hilarious, wonderful and I can’t wait to read the rest of Perry’s books.